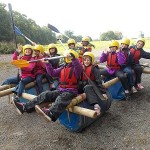 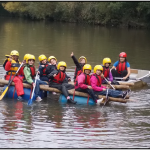 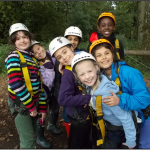 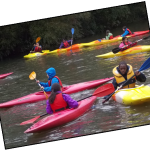 My room was quite small and there were two bunk beds.  I was sharing with Maya K and Billie.  Maya K and I had the top bunks and Billie had the  bottom bunk.  I think, considering the space limits, we organised ourselves quite well and got on better than I had hoped!

Day 1: We got up at 7 and then went to have breakfast.  The food was brilliant … just like a very good restaurant.  We had cereal and toast with jam and sausages and hash browns and baked beans.  There were two groups in which we did the activities: Mrs Polak’s group (COL) and Miss Doyle’s group (the Cubs).  I was in the COL group.  Our first activity was called Team Challenge.  It was an   obstacle course, but mud themed.  The first obstacles were tyres filled with mud which you had to hop in to and out of.  The next obstacles were two large tyres with a net going over them like a tunnel.  You had to crawl under the net.  The next was a wall which you had to climb over.  There was also an obstacle called the Washing Machine where you had to crawl under the tyres and your team mates had to lift them up for you.  We also had a camp fire where we learned lots of new songs, including ‘Brown Squirrel’, ‘Crazy   Elephant’ and ‘Bungalow’.  After the camp fire we had hot   chocolate and biscuits then it was bed time.

Day 2: After breakfast we walked down to the lake for kayaking.  We got very wet and the kayaks were small and moved from side to side a lot.  I crashed into the river bank and at that point I thought I was going to capsize.  Luckily I didn’t.  Then we did raft building where Amberley fell into the lake and I had to pull her up!

After dinner there was a disco.  We had glow sticks and squash.  After the disco we had biscuits and more squash.  So, all in all, it was a very good experience going to Fairthorne… apart from pulling Amberley out of the freezing  lake!.

As you can see from our gallery we all had a great time, including the teachers!